The technique of artificial insemination in livestock was developed at our Institute in 1950, and spread successfully is land wide. A network of swine AI service was organized later, and the boar semen supply center was founded at Changhua Propagation Station in 1994. It has been helpful to upgrade performance of breeding pigs, with cost cutting. Recently, AI in goat has become popular and superior buck frozen semen was imported for compensatory mating practiced by farmers. The techniques of AI in poultry, including chicken, goose, duck and turkey, were also developed. Duck AI has been widely used to improve the production, especially in Tsaiya and Muscovy duck mating for mule duck production. The Institute has transferred the AI technique of ducks to the farmers in countries of the Southeast Asia, and took part in cooperative research and exchange programs with INRA, France. The latest studies in preparing duck and goose frozen semen were fruitful. Moreover, the achievement of goose frozen semen brought about its application on adjustment of gosling and seasonal production. 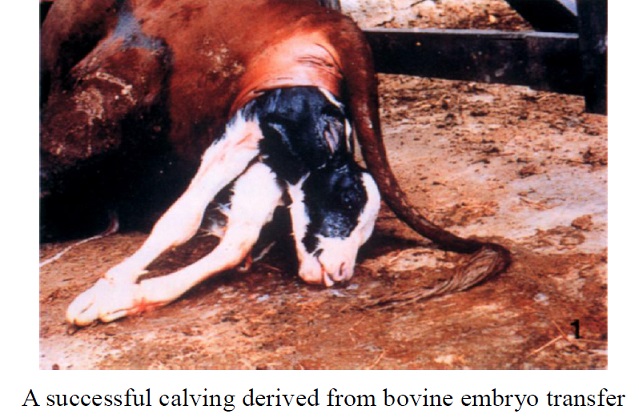 In Vitro Maturation as well as Fertilization and Cultivation

Porcine and bovine oocyte derived from in vitro maturation and in vitro fertilization have been successfully cultured to hatched blastocyst stage. Conception was established after transferring the blastocyst embryos. This achievement made it possible to obtain the oocytes from a slaughter house and to establish in vitro embryo production system for the porcine and the bovine. The probability of success has already surpassed the level required in practice and is also close to that of leading countries. At present the research activities carried our at the Institute include sex determination, identical twins produced by demi-bisected embryos, gene transfer, nuclear transplantation, induction of heat shock protein of embryo by high temperature treatment, vitrification freezing for porcine oocyte, etc. After rapidly thawing frozen ova, the mitochodrial-specific fluorescent dye Rhodamine 123 was used to evaluate mitochondria distribution in the cytoplasm. Thus, the surviving ova can be easily distinguished. The Institute also developed a fluorescent assay to determine living, moribund and dead sperms with nonlethal dyes, CYBR-14 and PI. In practice, the salted oocytis were used to appraise the boar fertility by evaluation of the ability of zona penetration of boar sperm. 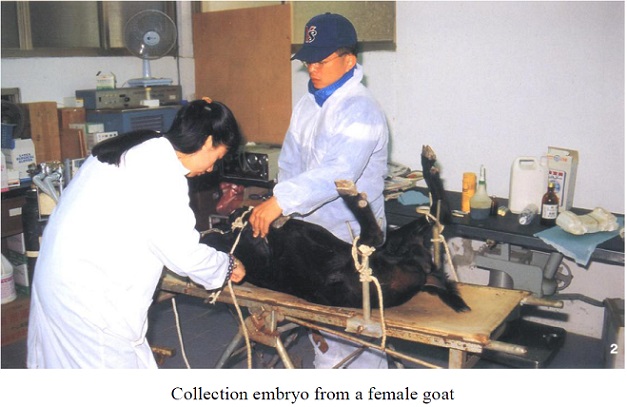 The Institute has engaged in the studies to develop a model of producing mice through gene transfer for many years and established the techniques. These techniques were applied to related studies in embryos in cattle, goats and pigs. Since embryo transfer in cattle and goats becomes a current tendency of developing biotechnology, the techniques of flushing, identifying, freezing and transfer of embryos have been established at our Institute. Embryo transfers either with frozen embryo bisected after thawing or frozen demi-bisected embryo resulted in the normal calvings. The study of sex determination in bovine embryo by PCR was introduced and a system was set up to produce offspring of predicted sex. In pigs, nuclear transplantation with the nucleus of Small-Ear pig transferred into Landrace oocyte also resulted in piglets born. The follow up survey of the performance of the nuclear transplant offspring and the study on effects of maternal cytoplasm are the first in the world. By use a DNA probe to identify the HAL-1843 genotypes canand screen, heterozygotic breeders in the herd, PSS genes in the breeding herd can be eliminated totally. By analyzing GPI and GPD blood types and polymorphism of nucleic acid, the genetic distances and the diversities among animals can be estimated. A micro-satellite genetic marker SW 373 was applied to map genes related to prolificacy. This genetic marker was comparable to ESR gene, which was reported in other countries, had an association with larger litter size in pigs. Porcine embryonic stem cell lines was established from culture of blastocysts separation and primordial germ cells. The pluripotency of these cell lines were demonstrated by chimeric pig's production and nuclear transplantation. These results drew attention of oversea research workers in the same field. Another success was the development of monoclonal antibody related to poultry disease resistance by applying the technique of cell fusion. Besides, progesterone releasing device was developed for inducing estrus on post parturition and anestrus ewes and resulted in shortening kidding interval and increasing their reproductive efficiency. The Institute has also engaged in distribution of the techniques including superovulation, embryo flushing, embryo examination and embryo transplantation to the private sectors to promote reproductive efficiency and management techniques. Lately, the trials to alleviate summer heat stress in cows resulted in significant improvements by manipulation of environment, preparation of ration and so on. More than 5,000 cows took part in the application program. The achievement was almost the same as that of Israel and it is a good experience of developing dairy industry in subtropical countries. 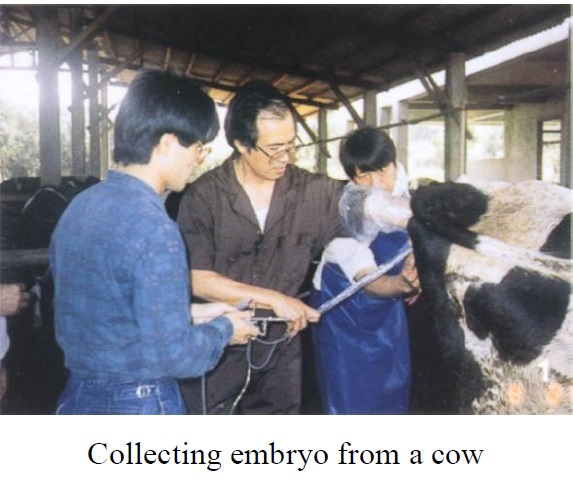 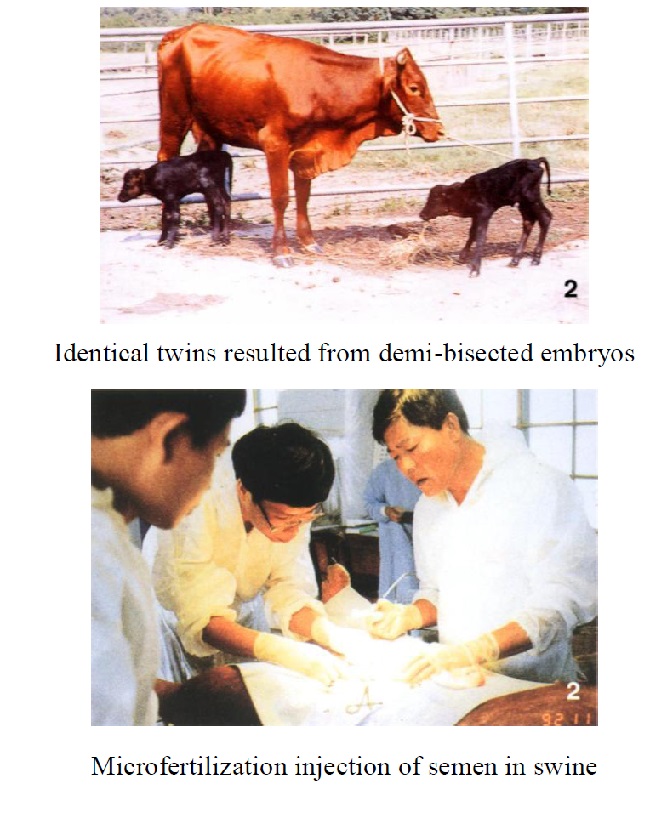 The establishment and application on porcine embryonic stem cells

Embryonic stem (ES) cells have the ability to reproduce themselves for a long period and differentiate into specific morphological and functional cells. The ES cells are an important material in developmental biology, genomics, and transgenic methods, as well as in potential clinical applications, gene therapy and tissue engineering. In our previous studies, we successfully established pES cells expressing green fluorescent protein (pES/GFP+ cells) (2009), ameliorated the Parkinson’s disease and spinal cord injury in the rats model by xenotransplantation (2010; 2013), and regenerated the periodontal furcation defects in a porcine model by allotransplantation (2013). These results suggested that the differentiation approach we developed would direct pES cells to differentiate into neural lineages and benefit the development of novel therapeutics involving stem cell transplantation.