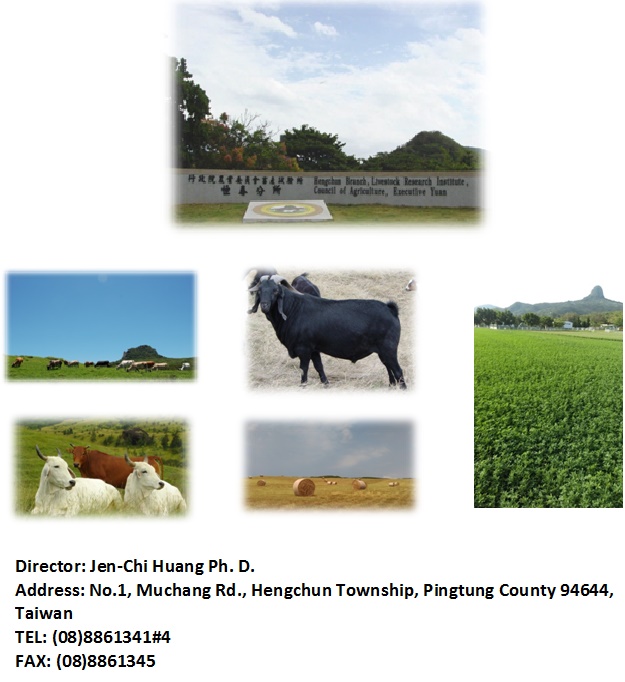 The history of this institute can be traced back to 1905 when the Livestock Farm of Hengchun County was founded by the Japanese colonial government to breed draft animals. Thereafter, it had been re­named several times before it was eventually affiliated to the Livestock Research Institute (LRI) in 1958, as one of its three branches focusing on research in beef cattle, goats and forage crops. Currently, LRI is one of the agri­cultural institutes under Council of Agriculture, Executive Yuan, R.O.C.

This institute locates at Kenting, Hengchun, the southern­most town of Taiwan, at a latitude of 21.6° north and a longitude of 120.5° east. About 50% of the whole 1,123 hectares of owned land serves as pasture while the rest steep areas preserve natural grasslands, bushes, and tropical monsoon forests, contributing in water and soil conservation. The tropical climate is characterized by high temperature and humidity in the summer and strong and dry monsoon wind in the winter. Temperatures average 20.7 °C in January and 28.4 °C in July. Annual preci­pitation averages 2,000 mm, falling mainly from June to September. 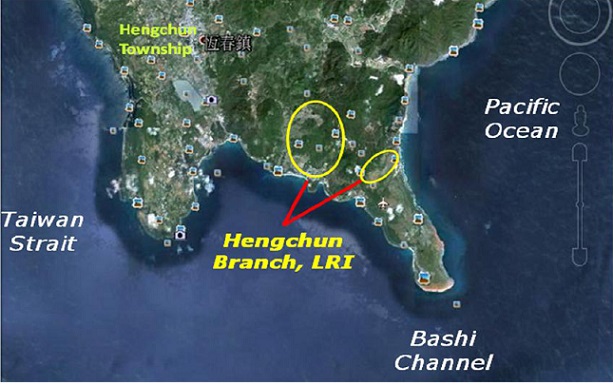 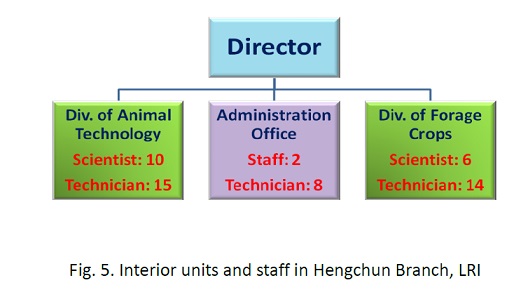 The mission of this institute is to support goat, beef cattle, and forage industries through scientific research and consultancy. The major research fields are:

The development of conventional beef industry, i.e. cow-calf model, has been limited due to the high cost of production. Currently, as much as 95% of beef demand is met by imported products from USA and Australia according to the official statistical data in 2014. Of the local beef, dairy beef shares at least 85-90% of the market while the rest are beef from crossbred yellow cattle and water buffalos. The number of water buffalos is decreasing drastically to less than 2,000 in recent years. The utilization of agro-byproducts such as brewer’s grains, soybean hull etc. has reduced the cost of feeding and made the production of dairy beef remain profitable. However, the use of frozen semen with sexed spermatozoa in the past few years has reduced the birth of dairy male, hence reduced the available source of dairy beef. Though the market share is small, being free of Ractopamine residue, the local beef is favored more and more by Taiwanese consumers. The certification of traceability for the product of local beef has been established in recent years.

Many of beef breeds including tropical breeds like Brahman, Sindhi, and Kankrej, and temperate breeds such as Santa Gertrudis, Charolais, Gelbvieh and Simmental have been introduced to Taiwan for crossbreeding of local cattle for draft or beef purpose during the last decades. Nowadays, there are nearly no purebred of beef cattle in Taiwan except the small population of 200 conserved Taiwan Yellow Cattle in Hengchun Branch of Livestock Research Institute (LRI), Council of Agriculture (COA). This indigenous animal now registered officially as a new breed of cattle is characterized by its tasty flavor of beef and remarkable carcass traits. In accordance with the certification of traceability, the stud stock of Taiwan Yellow Cattle has been transferred to the private sector, Hong-Jine Beef Company, for commercial production of distinctive beef products. In addition to the continuous conservation of indigenous animal resources, by both in situ and ex situ, the expansion of population by releasing the animals to private sectors and the crossbreeding with superior beef breeds to upgrade the quality of beef will be the major tasks in near future.

The main work of extension service in Hengchun Branch, LRI, is to select and release the stud stock with large body size, high productivity and well-adapted to tropical environment to beef farmers. The breeds of cattle that have been released to farmers include the straight breed of Taiwan Yellow Cattle and Brahman, and their crossbreds sired by European continental beef bulls. Technical service and consultancy were provided as well.

Goat meat, chevon, and milk have been described as healthy functional foods in the ancient Chinese medical text, the Compendiun of Materia Medica, written in 17th century. The output value of goat industry at national level is approximately 1.7 billion NT$ with the position next to pig, poultry, and dairy cattle industries. The total number of goats is around 167,000 in 2012, including 112,000 of meat goats and 55,000 of dairy goats. The average farming scales are 49 and 171 head per farm for meat and dairy goats, respectively. Due to the high cost of production, the 2,294 metric tons of annual production of chevon shares only 10% of market demand. The majority of mutton and chevon are imported from Australia and New Zealand.

1980s was a milestone for the development of goat industry in Taiwan. Before the time, goats were grazed on rangeland and the farming was less efficient because of the labor consuming and parasite problem. After 1980s, intensive management in goat barn replaced extensive grazing and Anglo Nubian, a large frame of exotic breed was introduced for upgrading of indigenous goats. Nowadays, Nubian and its crosses are the major breeds of meat goat which share over 70% of local chevon. Though Boer goat was introduced to Taiwan in 2000s, it is not popular so far due to the white coat color and fatty carcass. Instead, a new breed of meat goat consisted of 87.5% Boer blood with solid black coat is now selected by upgrading Nubian crosses with Black Boer. The alternative source of local chevon is castrated dairy males which shares the rest 30% of the local chevon market. Currently, there are 53 certified restaurants where cuisine of local chevon are served.

Dairy goat industry is one of the highly intensive animal industries in Taiwan. Alpine is the dominant breed over Saanen. Presently, these temperate originated animals have been selected as tropical lines of correspondent breed after 30 years of relocation and acclimation. Lactation traits of does are improved by using artificial insemination and French frozen semen. Technologies such as control of breeding season, embryo transfer and e-management have been developed and applied in dairy goat industry. 70% of goat milk was processed and sold as warm drinks by milk plants while the rest 30% was processed on farm. Over 60% of fresh goat milk has been certified by putting the GGM stickers on milk bottles since 2001. Over 450 million of stickers have been issued uptill the end of 2011.

Elite bucks are selected and released to goat farmers after the accomplishment of growth performance test and breeding soundness test. Hengchun Branch, LRI, offers services of semen and embryo collection and freezing, artificial insemination and embryo transfer. Other technical services and consultancy on feeding and management of goats are provided as well.

Forage shares a large portion in the ration of domestic ruminants. Improved grasses such as Napier, Pangola and forage corn have contributed to reduce the cost of ruminant production during the past decades. In addition to on farm growing of forage by individual farmers, forage cooperatives were founded and served as forage suppliers. We made great efforts in Hengchun Branch, LRI, in order to utilize the idle farmland efficiently and to elevate the percentage of domestic forage share in recent years: (1) Breeding and release the new variety of forage corn hybrid, Ken-Ting No. 1 and authorized to industry for seed production in 2013. The performance of this hybrid was welcomed by farmers in the first year on a large-scale trial and will be a good selection of crops under the policy of paddy land transformation and utilization. (2) Cooperation with Dairy Farmer Association and Goat Farmer Association on the utilization and preservation of local forage through workshops, seminar, on farm counseling and extension newsletter. (3) Study on combined planting of grasses and legumes to elevate the productivity and quality of forage. (4) Energy saving facilities for dehydration of green forage. 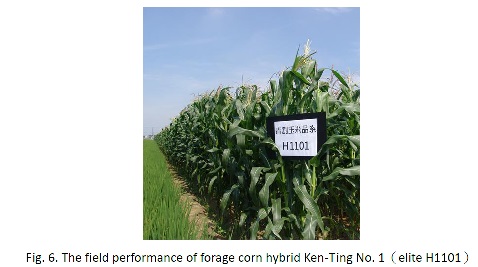