Application of RFID in the production traceability of native chicken

In order to promote the overall competitiveness of the chicken industry and consumers safety cognition of poultry meat products, the Livestock Research Institute, Council of Agriculture, Executive Yuan has utilized the “poultry foot ring” combined radio-frequency identification (RFID) and barcode identification technology to introduce feeding management of the native chicken production site. The Personal Digital Assistants (PDAs) records the data of the native chicken production traceability completely. The “poultry farm commercial poultry production flow operating system” was also developed so that chicken farmers may set individual chicken farm standard operating procedures as required. Digitizing applications to assist in everyday feeding and management tasks not only strengthens control of internal operations, it effectively enhances the farm’s operational efficiency. The PDA is used to save production traceability information onto the poultry farm commercial poultry production flow operating system, and complete various production traceability records necessary for the broiler chicken in the system. Once native chickens are of appropriate age, they are delivered to the abattoir by the shipper. Even after depilation, the foot of the native chicken still retains identification in the form of the poultry foot ring so that it is not confused with native chickens from other chicken farms. This forms an important identifying mark so that consumers may recognize the brand of native chicken they love. This achieves the dual benefit of ensuring reasonable profit for producers and also providing consumers with peace of mind in their poultry consumption. (H. L. Liu, T. L Liu Y. F. Lin, C. M. Hung, C. H. Hsieh, Y. S. Cheng, L.Y. Wang) 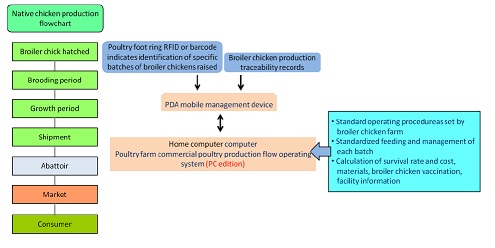 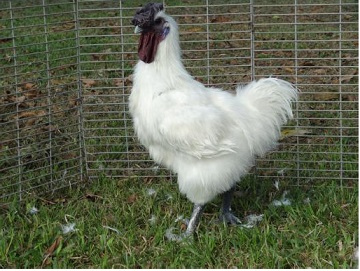 There are many related factors could affect the results of semen cryopreservation, such as the different cryoprotectants, packagings, freezing and thawing rates. Several studies showed that the best performances of chicken thawing semen obtained from semen frozen by using glycerol/straws/slowly or dimethyl acetamide (DMA)/pellet/rapidly freezing methods. Nevertheless, considering about cryobanking, which demands high level of biosecurity and accurate identification, the former method is still the most effective way to preserve avian semen. However, the mechanism of glycerol which causes the contraception to females is still unclear. Even glycerol-exposed semen remains very good quality after thawing, but it always leads to terrible fertility rates. Hence, the purpose of this study was to use different levels of DMA and DMSO to replace glycerol cryoprotectant, and then freezing semen with different rates to evaluate the membrane integrity, acrosome membrane integrity, mitochondrial function and membrane phospholipid function of chicken thawing semen. The result index could be the useful reference to modify the methods of chicken semen cryopreservation in the future. (H. L. Lin, T. Y. Kuo, D. Y. Lin, Y. Y. Lai and M. C. Wu)

Taiwan game hen is the most popular broiler in Hualien area. However, the growth performance is not consistent between individuals and it causes the difficulty in management. Therefore, selecting the outstanding parent birds is the most important thing for improving the growth performance of Taiwan game hens.This study was conducted to understand the hatching rate in summer, growth performance and semen quality of Taiwan game chickens. In last August and September, there were 114 and 52 eggs hatched respectively.The results of hatching test of the eggs hatched in August is 80% fertilized rate and the average birth weight is 40.48g. Comparably, the results in September is 79% fertilized rate and the average birth weight is 38.61g. Birds will be weighed every month till 22 wks old, and then the top three roosters will be slaughtered, moreover, the breast meat and thigh will be collected for meat quality analysis. Other roosters will be trained for semen collections during 26-30 wks old, and the quality of semen will be analyzed. Eventually, the high quality semen production roosters will be selected. 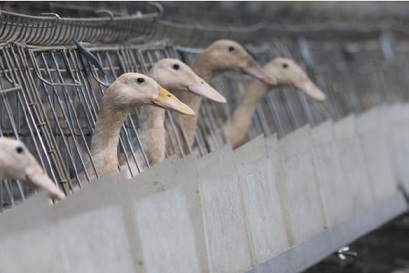 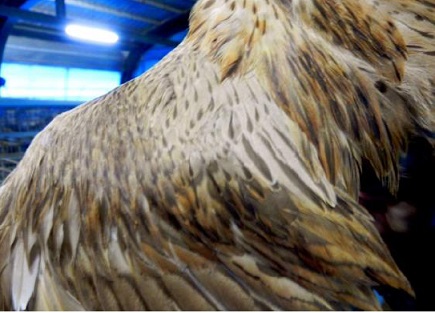 The objective of this study was to investigate the genetic polymorphisms of conserved black Muscovy ducks. Heterozygosity was analyzed by applying eleven microsatellites which specifically developed for Tsaiya ducks. The result showed that, in all of the three conserved population, there were no significant differences in the growing and reproductive performance between the current population and their ancestors. In the part of genetic analysis, a total of 35 alleles were observed with an average of 3.2 alleles and an average 2.1 effective alleles per microsatellite locus. The observed and expected heterozygosity of those polymorphic markers ranged from 0.040 to 0.793 with an average number of 0.376 and 0.066 to 0.773 with an average number of 0.423, respectively. All of eleven microsatellite markers tested fitted Hardy-Weinberg equilibrium, and the evaluated FIS value was not significantly different from 0 which indicated that black Muscovy population still not endangering with inbreeding depression. Furthermore, the genotypic data of 9th black Muscovy was combined with the one of 13th black Muscovy to draw individual phylogenetic tree and to conduct STRUCTURE analysis. The results showed that 9th and 13th black Muscovy had similar genetic background, and it also revealed current conservation strategy could indeed be used to maintain the genetic diversity of black Muscovy. In the future, in order to conserve the biodiversity of endemic duck breeds, it is suggested that the genetic monitoring should be carried out continuously. (Y. Y. Chang, H. C. Liu and J. F. Huang) 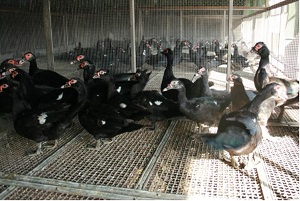 The commercial goose breeders did not have correct breeding programs in the past. They only choose the geese of heavy body weight and did not care about pedigree of them. The above results led to the reduction of egg production in geese. Therefore, how to improve the egg production of geese is the top priority job. Firstly, we have already helped commercial goose breeder to set up a correct concept about the types of breeder and meat. Secondly, we designed a breeding program which is to select heavy White Roman goose. The closed White Roman goose flock used for genetic selection was originally imported from Denmark and USA in 1974 and 1985, respectively. Egg production and body weight were selected from 1994 to 1999 by Changhua Animal Propagation Station. In 2002, the flock was selected for heavy body weight until 2007. A total of 6 generations, 1,082 goslings, were hatched and weighted at 8 and 14 weeks of ages. Based on the collected data of body weight and their pedigree, breeding values of body weights at 8 and 14 week-old were estimated with BLUP animal model, thereafter 25 ganders and 100 geese were selected as breeders to reproduce next generation. The results indicated that body weights at 8 and 14 week-old of the ganders were 4.41 and 5.77 kg, respectively, and that of the geese were 3.95 and 5.04 kg, respectively at the 6th generation. The heritability of body weight at 8 and 14 week-old were 0.549 and 0.596, respectively, and their genetic correlation was 0.897 from the data of the 1st to 6th generation. The breeding values of body weight at 8 week-old estimated by BLUP (Best Linear Unbiased Prediction) animal model in ganders and geese increased by 152 and 267.8 g, respectively, up to the 6th generation. The above new line of White Roman goose is bred by Changhwa Animal Propagation Station. It had passed the designate committee of Beidou White Goose LRI-1 in 2009 by Council of Agriculture, Executive Yuan, Taiwan.

Thirdly, we designed a breeding program which is to select the high egg production line of White Roman goose. The experimental White Roman geese were the offspring of the second generation of high production of day old gosling line born in 2004. The reproductive performance including age, body weight and egg weight at the first egg, egg production and laying period would be investigated. The data of egg production and pedigree obtained will be analyzed with the statistics method of Best Linear Unbiased Prediction (BLUP). After that, 25 ganders and 100 geese selected will be bred at next breeding season. We expect this breeding program will improve the ability of egg production of geese after selecting 5 generations.

Further, we help the breeders to select body type and body weight at 12 weeks old in geese, and select egg production in breeder geese. We hope the experimental results will be introduced with the productive benefit to commercial goose breeders and farmers. (M. J. Lin, S. C. Chang and Y. S. Jea) 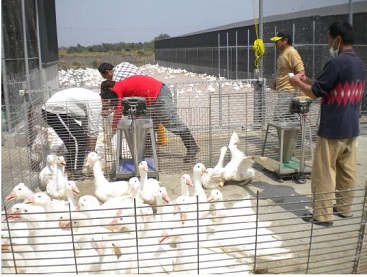 The breeding program is to select the high egg production line of white Roman goose. The experimental White Roman geese were the offspring of the second generation of high production of day old gosling line born in 2004. The reproductive performance including age, body weight and egg weight at the first egg, egg production and laying period would be investigated. The data of egg production and pedigree obtained will be analyzed with the statistics method of Best Linear Unbiased Prediction (BLUP). After that, 25 ganders and 100 geese selected will be bred at next breeding season. We expect this breeding program will improve the ability of egg production of geese after selecting 5 generations. When the high egg production line of white Roman goose is named as a new line in the future, we can prove high quality goslings of the egg production line to commercial goose breeders and high quality goslings of the hybrid by the line of egg production mated the one of heavy body weight to commercial goose farmers. Experimental results will be introduced with the productive benefit to commercial goose breeders and farmers. Geese feeding 85% of basal ration feed restriction and 85% of basal ration feed restriction plus 1.5 and 4.5 kg of grass had higher hatchability of fertilize egg than feeding basal ration ad libitum (67.8, 63.7, 66.1 vs. 54.1%). Therefore, in view of economic benefits and animal welfare, feed restriction accompany with green grass is a good way to promote fertility and accompany with green hatchability of geese. (M. J. Lin, S. C. Chang, K. C. Wu, Y. S. Cheng and Y. S. Jea) 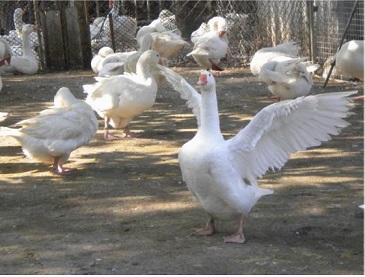