The objective of this study is to evaluate the passive protective efficiency of immunoglobulin in yolk (IgY) specific against human enterovirus type 71 (EV71). The antibody was raised by intramuscular immunization to 10 White Leghorn hens, with inactivated human EV71 as antigen. The titer and specificity of the antibody were analyzed from purified IgY in the egg yolks of immunized hens. Results indicated that the titer of IgY specific against EV71 increased from the third week after the first immunization. The results of the neutralization effect of specific IgY in EV71-challenged mice demonstrated that the EV71-specific IgY, either by intraperitoneal injection or oral administration, was able to significantly reduce the morbidity and mortality in EV71 infected mice pups. 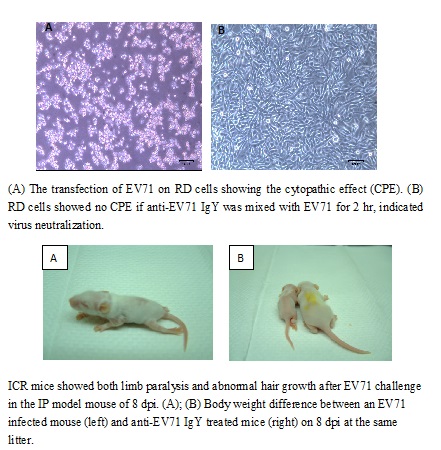