The objective of present study was to assess the feasibility of sperm quality evaluation by flow cytometry in Muscovy drake (Cairina moschata). Fresh semen of Muscovy drakes was mixed with the semen stored 1-day at room temperature by ratios: 100％, 75％, 50％, 25％ and 0％. The sperm membrane integrity and mitochondria function of the pooled semen was detected by flow cytometry, and the sperm motility, viability and morphology were investigated by microscopy. Six drakes were selected randomly to collect their semen and evaluate sperm quality by flow cytometry and microscopy. These semen was also artificially inseminated (AI) to female Muscovy ducks and female Kaiya ducks (Anas platyrhynchos). The correlation between these parameters of sperm quality and AI result was analyzed. The result of present study showed, flow cytometry not only distinguished sperm membrane integrity and mitochondria function of pooled semen with different sperm quality, but also discriminated the sperm quality among drakes. In addition, there was positive correlation among the two parameters by flow cytometry and sperm motility, viability and normal morphology by microscopy (P < 0.05). In conclusion, flow cytometric detection assisted with microscopy could be an effective tool to evaluate sperm quality of Muscovy drake. The Muscovy semen stored at 4℃ for 24 hr could get better sperm membrane integrity and mitochondria function than that stored at 10℃. 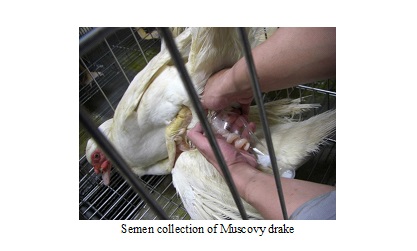