The aim of this study was to evaluate the performance of three different types of laparoscopic artificial insemination tubes. In the first experiment, we compare the cost, operation time starting from thawing of frozen semen to ready for insemination, and the pregnancy rate, delivery rate, average litter size after laparoscopic artificial insemination. Results showed that the cost and operation time for Germany, French, and self-made tube was 375, 150 and 150 NTD, and 120, 95 and 70 sec, respectively. In addition, laparoscopic artificial insemination with 75 × 106 spermatozoa/mL by using the Germany, French, and self-made tube resulted the pregnancy rate (at day 45 post insemination, detected by ultrasonic) of 38, 57, and 50%, with the delivery rate of 100, 75, and 100%, and the average litter size of 1, 2.3 and 2. In the second experiment, we use self-made tube to inseminate into three different position of uterus horn (oviduct-uterus junction, middle of uterus horn and uterus horn-uterus body junction) to evaluate their resulted pregnancy rates. The result showed the pregnancy rate of insemination into uterus horn-uterus body junction seems lower than that injection into oviduct-uterus junction and the middle of uterus horn (33, 50, 66%), but there were no difference between that of oviduct-uterus junction and the middle of uterus horn insemination. 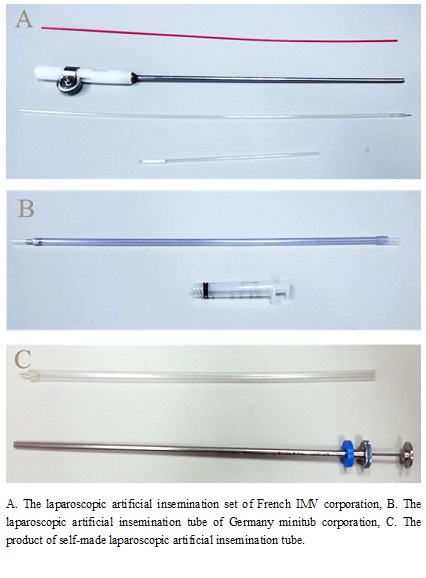