Evaluation of genetic diversity of dairy cows by microsatellite markers

The genetic diversity protection of domesticated animals is one of the important targets of Aichi Biodiversity Targets adopted by the Tenth Meeting of the Conference of the Parties (COP10) to the Convention on Biological Diversity. The genetic diversity was evaluated using 13 microsatellite markers to genotype 144 bovine DNA samples. The results indicated that the polymorphism information content from 3 markers was below 0.5. In this study, the values of expected heterozygosity (He), observed heterozygosity (Ho), and polymorphism information content (PIC) ranged from 0.374–0.817, 0400–0.889, and 0.303–0.793, respectively. Moreover, the average values of He, Ho, and PIC were 0.657, 0.658, 0.607, respectively. Based on the results shown above, the cattle population possesses high genetic diversity. (R. B. Liaw, J. C. Chen, S. S. Tsay, J. S. Hwang, H. L. Lin, T. F. Shiao, K. H. Lee and M. C. Wu)

Bovine brachyspina syndrome (BS) is a recessive genetic defect first observed in Denmark in 2006. The syndrome is caused by a 3.3-kb DNA deletion in the bovine Fanconi anemia complementation group I (FANCI) gene on bovine chromosome 21. In this study, a total of 144 dairy cow samples including 32 samples from A farm and 112 samples from B farm were examined. The result indicated that 2 carriers were from A farm and 6 carriers were from B farm. The frequency of BS carriers in this study was 5.6% which was lower than that reported in the Netherlands (7.4%) and the United States (6%) but was higher than that in Mainland China (3.8%). The dairy industry has huge losses due to brachyspina syndrome. The genetic defect should be eliminated gradually by large scale genotyping and selective mating. (R. B. Liaw, J. C. Chen, S. S. Tsay, Y. C. Chou, T. F. Shiao and M. C. Wu) 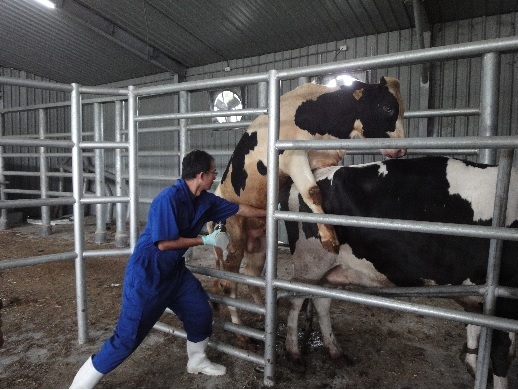 Temporal expression of transgene and siRNA is essential for studying the function of targeted genes in a cell or an animal model. RNA interference (RNAi) is a powerful tool to inhibit gene expression and induce loss-of-function phenotypes. We developed a multiple inducible transgene and short hairpin RNA (shRNA) expression system that is based on the tetracycline operator sequences (tetO), eukaryotic RNA polymerase II and III promoters (U6 shRNA promoter). Our components included a series of multiple tetOs that were placed on the upstream of minimal RNA polymerase II and U6 shRNA promoter and tetracycline repressor or activator. This bipartite inducible system for transgene and shRNA allowed us to induce transgene expression and to inhibit gene expression simultaneously. For demonstrating the versatility and proof of concept, we used DNA vector-derived shRNAs to selectively inhibit expression of functional gene Mst3, and induce GFP transgene expression. Our results showed that these inducible vectors could be tightly regulated by doxycycline, in a concentration- and time-dependent manner. The synthetic target shRNA DNAs could be inserted into these inducible vectors by using a forced cloning restriction enzyme, which made the preparation of inducible DNA vector-derived shRNA expression systems easy. These bipartite inducible vectors displayed simplified, easy-to-cloning, versatile and high-inducible phenomenon and demonstrated a potential in the generation of controlled temporal gene silencing expression. (J. S. Chao) 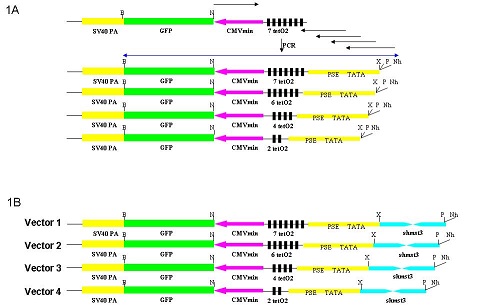 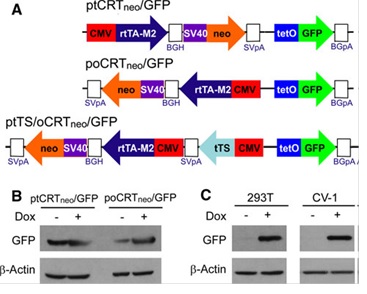 The conservation and effective population sizes in 2013 were 258 and 37 for Taiwan Yellow Cattle (TY), and 123 and 11.2 for Taiwan Black Goat (TB), respectively. The accumulated number of released TY from 2009 to 2013 was 192 in 11 risk-sharing farms. Up to the end of 2013, a total of 408 TY existed in 19 farms in Taiwan and Penghu areas. On the other hand, a total of 18 heads were released to 3 risk-sharing conservation farms located in Kaohsiung, Penghu and Pingtung county from 2010 to 2013. For conservation of gamates, 213 doses of semen from 5 TY bulls and 116 doses of semen from 2 TB bucks were frozen for long term preservation in 2013. The meat of TB contained 1.73 folds of unsaturated fatty acids than saturated ones. In order to improve the beef quality and productivity of TY(Y), exotic beef breeds, e.g. Limousin(L), Piedmontese(P), Simmental(S) and Japanese Wagyu(W) sires were used to crossbred with TY cows by artificial insemination. Results showed that PY had the best performances in terms of dressing percentage, lean/carcass ratio, bone/carcass ratio, fat/carcass ratio and rib eye area. In addition, the PY beef contained lower calories, crude fiber and cholesterol, and higher crude protein. The beef of straight TY contained the highest unsaturated fatty acids(USFA)/saturated fatty acids(SFA) ratio, whereas the SY beef contained the least ratio of USFA/SFA. The value of shear force revealed that the beef of WY was the tender-most, while SY beef was the tough-most one. 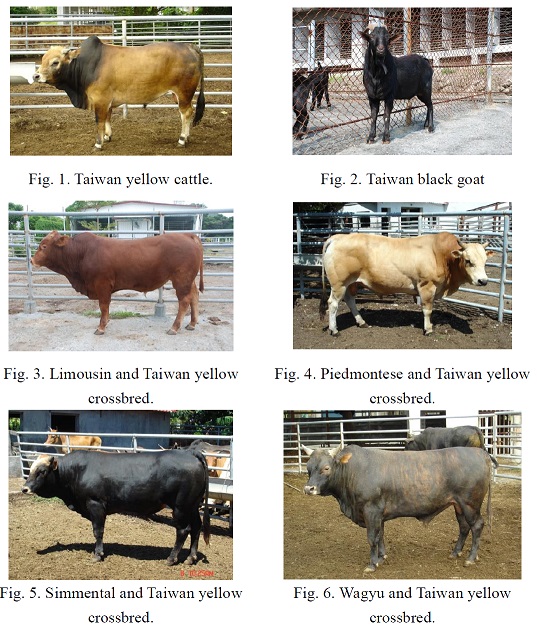 In recent years, Taiwan buffalo (Bubalus bubalis) is a rapidly declining species which is endemic to Taiwan. In order to maintain the genetic diversity and to avoid inbreeding, as well as for ex-situ conservation of the population maintained in our facility (Livestock Research Institute (LRI), Hualien branch, Taiwan), we examined the germplasm population of Taiwan buffalo genetic structure using twelve microsatellite markers as the first and essential step for the conservation work. The results showed that the average number of observed alleles per locus (Na), the average number of effective alleles per locus (Ne), the average expected hetrozygosity (HE) and the average observed hetrozygosity (HO) were 4.3, 2.5, 0.532 and 0.505, respectively. The average values of PIC and FIS over all loci were 0.480 and 0.043, respectively. However, the mean values of HO, HE, PIC and PID of the remaining markers would increase considerably, when the two low polymorphic makers, CSSM045 and CSSME070, were excluded from the test (original values obtained with 12 markers: 0.505, 0.532, 0.480, and 6.99x 10-8, the values obtained after removing CSSM045 and CSSME070: 0.590, 0.622, 0.561, and 9.71x 10-8). The genotyping result of these 12 microsatellite markers was further analyzed with STRUCTURE software, which revealed that the germplasm population of Taiwan buffalo could be clustered into 3 subpopulations. They were differentiated significantly between the first and the third subpopulations (bootstrap=100); however, there was no significant differentiation between the second subpopulation with the first or the third subpopulation. The similar result was also shown in the phylogenetic tree drawn using POSA. Based on the analysis completed, we confirmed that the founding herd of Taiwan water buffalo is relatively small in our facility and the genetic structure was not influenced much by exotic breeds. Fortunately, the degree of inbreeding was fairly low (FIS=0.043, P ＞ 0.05), even though the population showed minor differentiation which probably was the result of designated mating. In conclusion, the 10 microsatellite markers can be used in establishing phylogenetic relationship among individuals, maintaining the genetic diversity, and establishing an optimal mating plan for population reared in our facility, and for analyzing the population structure in the wild and in captivity. Furthermore, our result can serve as a ground work for ex situ conservation work in the near future.( D. Y. Lin, F. Y. Lai, L. Y. Wei, H. Y. Kuo, P. A. Tu, Y. Y. Lai, M. C. Wu and P. H. Wang)